Cisbio's Human MMP2 assay is designed to measure the concentrations of MMP2 (pro- and active forms) in cell culture supernatants of human origin. Matrix metalloproteinase (MMP) 2, also known as gelatinase A, is a zinc-dependent endopeptidase secreted as an inactive proenzyme that is then activated by proteolytic cleavage. MMP2 plays a significant role in tissue repair and remodeling by degrading structural components of the extracellular matrix (ECM), such as collagens, gelatin, and fibronectin. This endopeptidase also plays a major role in cell growth, migration, inflammation, and angiogenesis, by processing a variety of non-ECM substrates such as cytokines and chemokines (e.g. pro-TGF-β, pro-IL-1β, pro-TNF-α, CXCL12, CCL7, CX3CL1). Its enzymatic activity is regulated by interaction with its physiological inhibitors, the tissue inhibitors of metalloproteinases TIMP1 and TIMP2, which block the access of substrates to the catalytic domain of the enzyme. MMP2 is mainly regulated at the level of transcription by several cytokines and growth factors, including TGF-β. Upregulation of MMP2, leading to MMP2-TIMP1/2 imbalances, has been linked to tissue fibrosis, cancer, diabetes, arthritis, and cardiovascular diseases. The secretion of this biomarker is therefore a common end point measured when investigating such diseases and to find new drugs.

Our distributors
​Cisbio's Human MMP2 assay is based on a TR-FRET sandwich immunoassay involving two specific anti-human MMP2 antibodies, one labelled with europium (Eu3+) cryptate (donor) and the other with d2 (acceptor). Both antibodies bind to human MMP2, and the donor-acceptor proximity enables a fluorescent TR-FRET signal. The intensity of the signal is proportional to the concentration of human MMP2 present in the sample.

​​The Human MMP2 assay can be run in a 96- or 384-well low volume white plate (20 µL final). As described here, cellular samples or standards are dispensed directly into the assay plate for the detection of human MMP2 by HTRF® reagents. The antibodies labelled with HTRF fluorophores may be pre-mixed and added in a single dispensing step. No washing steps are needed. The protocol can be further miniaturized or upscaled by simply resizing each addition volume proportionally.The assay can be performed on frozen or freshly prepared cellular samples, and the HTRF signal can be recorded with most TR-FRET multimode plate readers.

​The human hepatic stellate cell line LX-2* was plated in a 96-well plate (50,000 cells/well) in complete culture medium. The day after, cells were treated for 24h with 100 µL of increasing doses of human TGF-β1 diluted in FBS-free medium supplemented with 0.2% BSA. Cell supernatants were collected for the quantitative measurement of secreted MMP2 levels.Cell treatment with TGF-β1 for 24h induces an upregulation of the secreted level of human MMP2.
​*Provided by EMD Millipore (product number #SCC064)

​The human lung fibroblast cell line MRC-5 was plated in a 96-well plate (30,000 cells/well) in complete culture medium. The day after, cells were treated overnight with 100 µL of increasing concentrations of human TGF-β1 diluted in FBS-free medium supplemented with 0.2% BSA. Cell supernatants were collected for the quantitative measurement of secreted MMP2 levels. As expected, TGF-β1 treatment leads to a dose-dependent increase in the secretion of human MMP2.

​A side-by-side comparison between the HTRF Human MMP2 assay kit and a commercial ELISA was performed on cell supernatants of MRC-5 cells treated with TGF-β1 for 72h (in FBS-free medium + 0.2% BSA).The two methods are very well correlated, as demonstrated by the value of the correlation coefficient (r) which is close to 1. 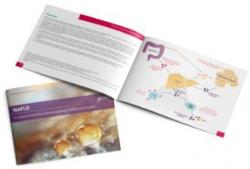 A collection of the most important NAFLD pathways 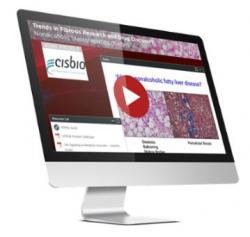