The active GLP1 kit is designed for the accurate quantitative measurement of the glucagon-like peptide-1 active forms on cell supernatants.
See more
Download the protocols

Active GLP-1, also known as glucagon-like peptide-1 active forms (GLP-1(7-36)NH2, and GLP-1(7-37)), has become a key biomarker in treatment of type 2 diabetes. The main actions of GLP-1 are stimulation of insulin secretion, and inhibition of glucagon secretion and food intake. In vivo, the active forms are rapidly degraded into inactive forms (9-36)NH2 and (9-37) by the dipeptidyl peptidase IV (DPP-IV). The active GLP-1 kit is designed for a rapid detection of GLP-1 in cell supernatants.

Our distributors
Active GLP-1 is measured using a sandwich immunoassay involving two antibodies, one labelled with Lumi4Tb-Cryptate (Donor) and the second with d2 (Acceptor). The intensity of the signal is proportional to the concentration of GLP-1 active forms present in the sample.

The active GLP-1 test can be run on cell supernatants using a simple 'addition and read' procedure described on the right (no wash steps). The HTRF conjugates may be pre-mixed and added in a single dispensing step to further streamline the protocol. An assay can be run in 96- to 384-well plates by simply resizing each addition volume proportionally. The active GLP-1 assay protocol is described here, using a white 384-well small volume plate.

Dilutions of the NCI-H716 cell supernatants 1 and 2 were performed using the HTRF assay diluent. GLP-1 concentration was then determined in crude supernatants and in diluted samples (1:2, 1:4, 1:8 and 1:16). Figure on the right indicates the means (+/- SD) of 3 independent experiments. The strong correlations obtained between measured and expected GLP-1 concentrations demonstrate the linearity of dilution within the assay range.

A time-course was determined for active GLP-1 secretion in human enteroendocrine NCI-H716 cells after glucose stimulation. Cells (2.105 cells/well) were seeded into 96-well culture plates pre-coated with Matrigel, and cultured for two days with DMEM 10% FBS medium. On the experiment day, cells were washed and incubated for 2 hours with increasing concentration of glucose in 100 µL of KRB supplemented with DPP IV inhibitor . At the end of glucose stimulation, 10 µL of supernatants were transferred to a 384 small volume-well plate, and assayed for active GLP-1 level as described in 'Assay protocol'. As expected, active GLP-1 was induced with Glucose dose dependence. The maximum amplitude of active GLP-1 triggered by 10% glucose versus basal production was 2.1.

A high throughput, mix and read solution for the study of metabolic diseases

A guide to help you in your diabetes projects 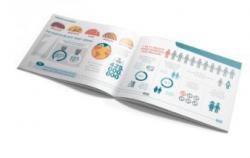 A guide to help you in your diabetes projects

LTC4 quantification in cells and supernatants